Getting started with Visual Studio Code

Visual Studio Code is the latest cross platform editor by Microsoft and I started looking into it since I wanted a fast editor which provided me Intellisense similar to what Visual Studio provides. At first I thought it is an IDE, but it is not. It is a code optimized editor, and I am not disappointed at all by its features. To get started, you can download Visual Studio Code from code.visualstudio.com. You can then explore the editor’s various functionalities such as

These are a few of the features that made me interested in trying the editor for a hybrid mobile application I intend to build in the near future since I do not need any of the IDE features of Visual Studio which reduce the speed of the development process. In this post, I will write about a few features which I explored about the editor.

If you come from Visual Studio background, and expect a csproj or xproj file which decides how the files load up in the IDE, Visual Studio Code is nothing like it. It is a plain files/folders based editor. You do not need to provide it with a context file to load everything. You can simply load a file or a folder inside the editor. However if you have files like package.json, project.json or bower.json (which are used in npm, ASP.NET MVC 5 or bower), Visual Studio Code provides you with some additional options. 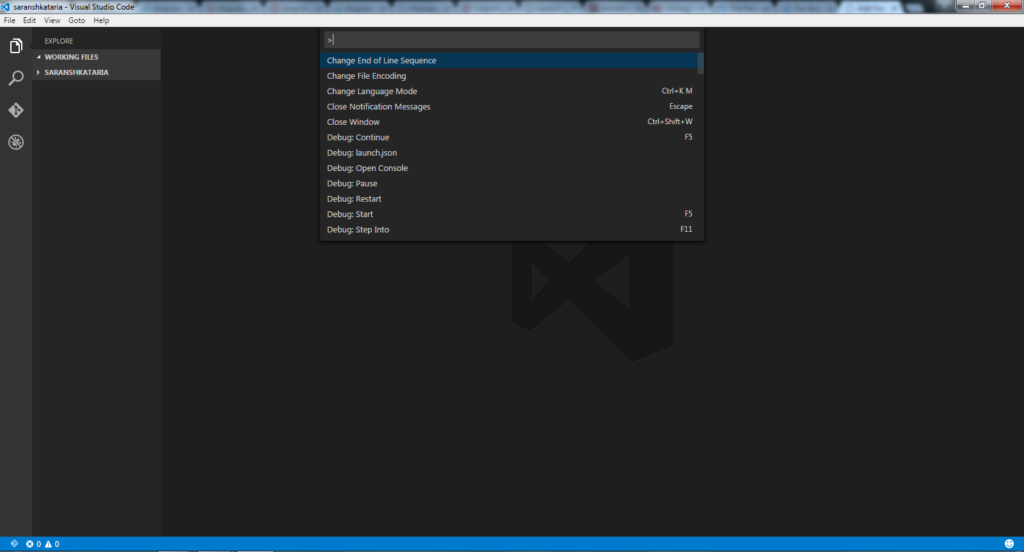 The command palette can be opened using Ctrl + Shift + P and is one of the most used features in case you forget other keyboard shortcuts. The Viewbar on the left has 4 icons.

The sidebar changes according to what button you click on the left. And the editor is towards the right of the sidebar. The bottom bar is the status bar, which tells the git branch you are using, the number of errors and warnings, line number, file format and language.

The explorer view splits the sidebar into two halves, the working files (which are the files you opened recently) and the working directory you are in.

When using windows, you really do not feel like using command prompt a lot. And when you have the option to edit with Visual Studio Code in the context menu while right clicking a file, this does not make much sense. But what the command line parameters allow are options to open the editor in a new instance versus opening it in an already running instance. Moreover, it allows you to open a specific file with the cursor at a specific line number and a column number as well. These can be useful at times. The parameters available are:

If you are using a mac, you need to use the Command key instead of Ctrl. For a list of all the command shortcuts, you can visit the Code website to get an extensive list.

Do let me know in comments of what you think about the editor and your favorite features of Visual Studio Code!

As developers, we always want to be more productive. And who does not like to write more code using a lesser number...
Read more
Programming

Why you should be using an EditorConfig file in your project

Let us all face it. It is 2017 and many of us are still fighting over tabs versus spaces! And nobody cares what code...
Read more
Programming

Virtual Reality comes closer to the Web with React VR

At Oculus Connect 3, Oculus, the virtual reality giant, announced that they are working on something pretty awesome regarding virtual reality! They like to call it...
Read more
Programming

One of the most popular questions from inexperienced programmers is about the quest of becoming a good programmer. Aspiring programmers are often found cutting corners and...
Read more